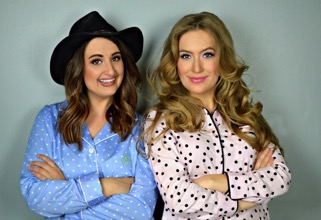 The fun-loving duo also released a creative video to introduce their new project. You can watch it HERE!

About Mary Kutter: Mary Kutter is a proud Kentucky native. Along with performing and songwriting, she hosted her own TV/radio show, Mary Kutter’s Country Music Hour, for three years. She has interviewed several hit songwriters, including Tony Arata, Kent Blazy and Kim Williams. This goofy blonde loves rap music and eating her weight in Oreos and Taco Bell.

About Megan Barker: Megan Barker was born in Nashville into a music industry family. She grew up in Las Vegas and began performing on the strip as a teenager before opening for acts like Lee Brice, Montgomery Gentry and more. If you follow her on social media, you’ll see Megan can’t stop rescuing cats and loves to post videos of herself acting silly.

For more information on Jammin’ in Jammies, visit www.jammininjammies.com and be sure to follow the show on Instagram!